The plant began shipping brick in 1913. 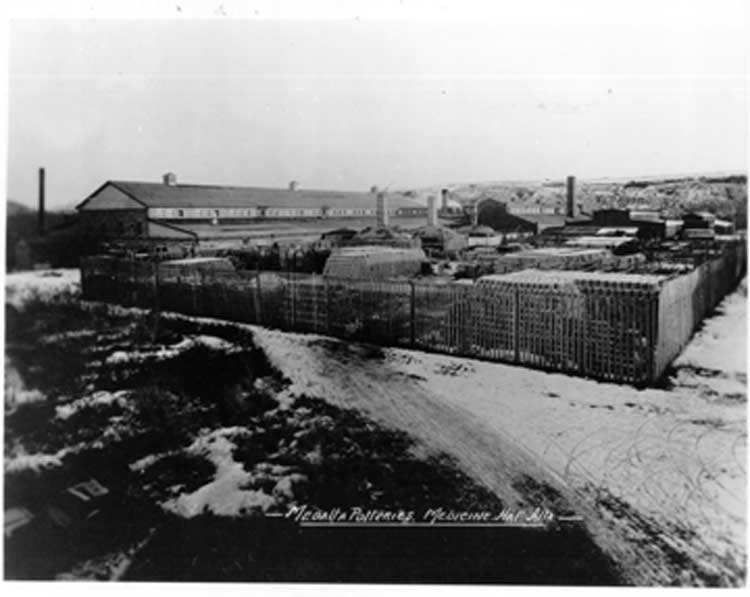 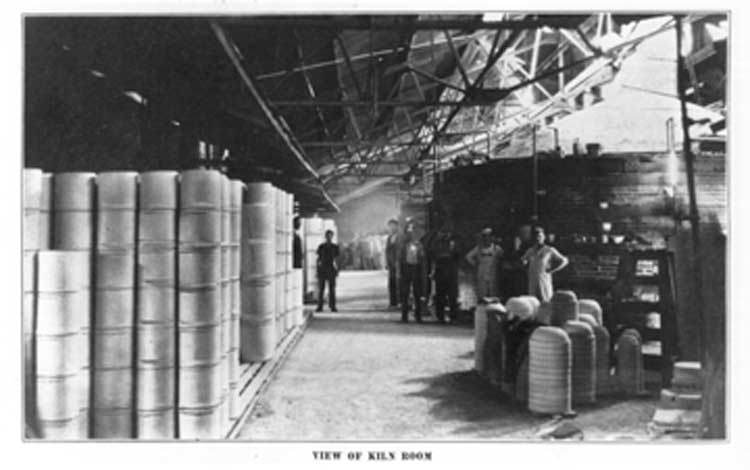 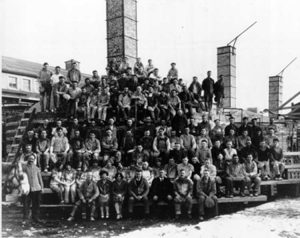 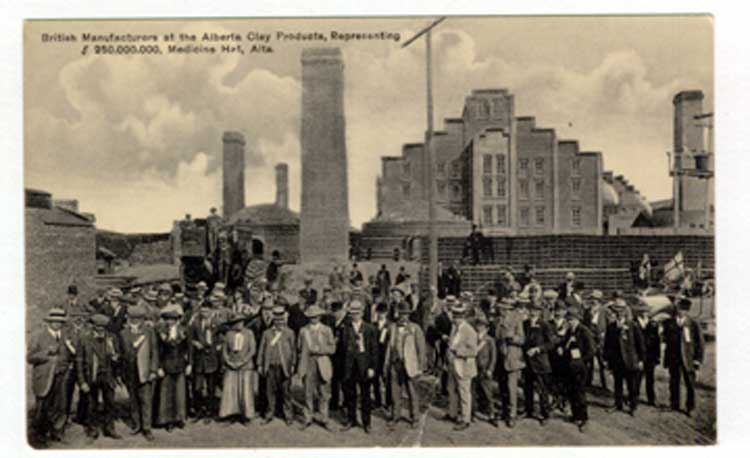 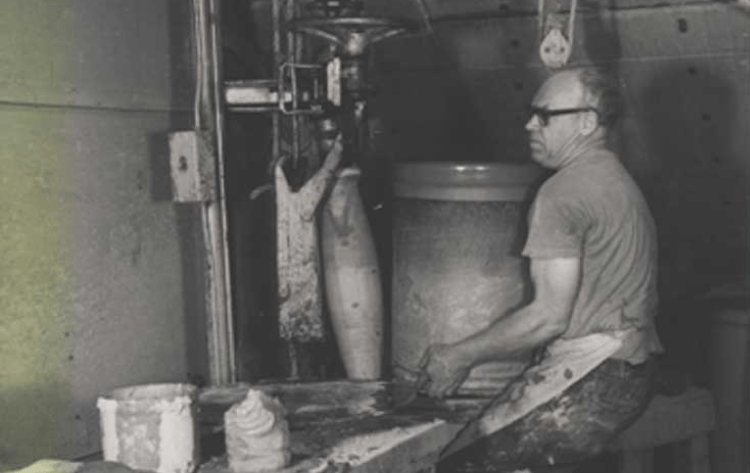 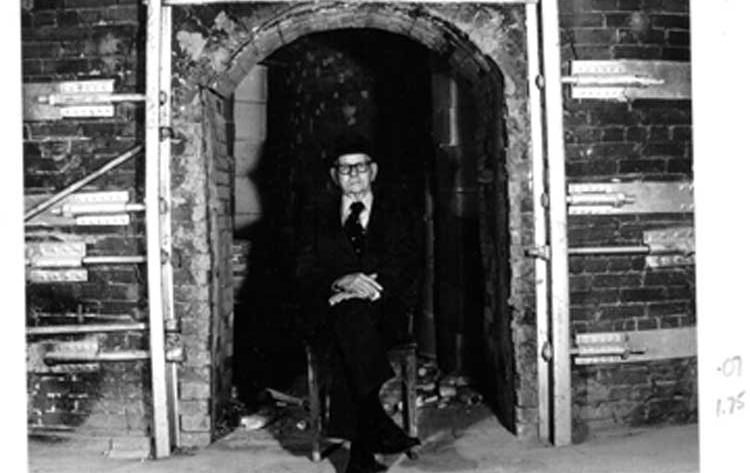 Medicine Hat owes its industrial origins in large part to the Canadian Pacific Railway. The CPR went through the southern part of the Northwest Territories in 1882, reaching as far as Maple Creek. A small tent town developed to the east around the present site of Medicine Hat as people gathered to await the arrival of railway construction in the spring. On June 10th, 1883 the first train steamed through, and soon brought lumber for wooden houses to replace the tents.

The community grew quickly, incorporating as a town in 1899 and a city in 1906. By 1912 the population had reached almost 12,000. Strategically located between Winnipeg and Vancouver, the CPR selected the community as an ideal location for its Divisional Headquarters. With almost 1100 kilometres of track within the city limits, Medicine Hat had the longest railway mileage of any CPR division in Canada.

The frequent service and extensive connections offered by the CPR attracted industries to locate in Medicine Hat. It soon became the largest distribution centre in western Canada and, as a recognized manufacturing city, received specially discounted rates from the CPR.

What Medicine Hat did not owe to the CPR it owed to its own geology. Natural gas was discovered in 1883 when the CPR struck a small flow of gas while drilling for water. Gas was initially used to pump water into the tanks which supplied the CPR engines, and gas jets were discovered continuously and accidentally as wells were bored or shafts sunk for other purposes. The commercial significance of natural gas did not become clear until a large well was struck in June of 1904. “Eureka We Have Found It!” the Medicine Hat News proclaimed on the front page of the June 16th issue. “There is no doubt now but that Medicine Hat will become the manufacturing centre of the west.” Gas provided the three essentials for industrial production; heat, light, and power, at a fraction of the cost of coal.

This discovery fuelled an industrial boom in the city which spanned the next decade. 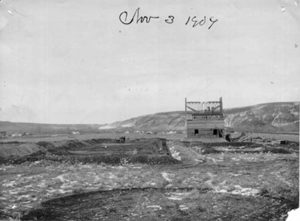 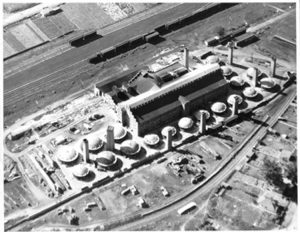 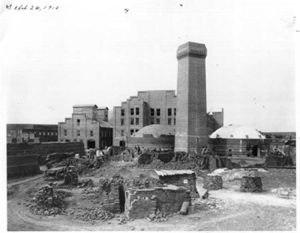 As to the certainty of supply, the Medicine Hat News was happy to report by 1909 that the city’s gas came from “a formation which assures a supply in the Medicine Hat field for practically all time to come.” The gas field lay at a depth of between 1,000 and 2,000 feet and was estimated to measure 150 square miles. The sheer abundance allowed the city extravagances, the most famous of which was that streetlights in Medicine Hat stayed lit day and night as it was cheaper to keep them burning than to pay someone to turn them off.

Natural Gas was critical to the development of Medicine Hat. Without this abundant natural resource, residents were aware that their city would likely remain a railway and ranching centre of two to  three thousand people. Medicine Hat’s industrial economy developed on the basis of cheap power, natural gas was the principal guarantee of the city’s importance and prosperity. The boom starting in 1905 quickly escalated as the city’s potential for industrial progress captured the imaginations of civic boosters, creating a burst of industrial development between 1910 and 1914. Mills and factories sprang up in the city’s industrial districts along streets with names like Railway, Tractor, Industrial, Steel, Factory, and Clay. Woolen mills, greenhouses, foundries, glass manufacturers, breweries, flour mills, machine companies, even a crayon manufacturing company: all were enticed by the city’s offers of free building sites, free water, tax concessions and cheap gas. This boom established Medicine Hat as the early Industrial Centre of Alberta, and helped create the city’s entrepreneurial identity. 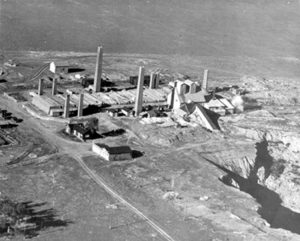 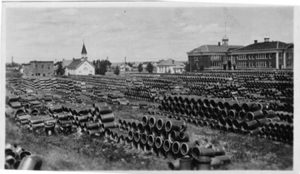 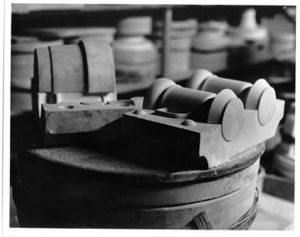 Of the many industries to start up in Medicine Hat prior to 1914, the manufacture of clay products was one of the few to survive the turbulent economy and labour shortages created by World War I. The industry’s main products; brick, tile, and sewer pipe supplied the massive construction business that followed on the heels of western immigration. Strong demand for these products assured employment and economic stability for the city.

As with the other industries in Medicine Hat, clay products plants benefited from the advantages of natural gas, notably, cheap gas reduced the cost of basic utilities. The principal expense in manufacturing clay products was maintaining a heat source capable of hardening pliable clay into vitrified ceramic. Natural gas provided reliable, consistent heat at the intensely high temperatures needed for firing the kilns. The fact that it was also inexpensive made it even more attractive.

The availability of gas assured clay products as one of Medicine Hat’s earliest and most successful industries.

Medicine Hat’s other natural advantage for the clay products industry was an abundant supply of clay. For centuries, the South Saskatchewan River deposited alluvial silt along its banks, creating rich deposits of clay as it wound through the lowlands of Medicine Hat . As early as 1885, these clays were tested for their brick making potential and found to be of excellent quality. “Were the manufacturing of brick commenced,” wrote the Editor of the Medicine Hat News prophetically in that year, “there’s ‘millions in it’ for some energetic individuals.” Continued testing only served to confirm the value of Medicine Hat’s clay beds, and the first brick yard appeared in 1886.

The industry slowly grew over the next twenty years, and in 1907 reached a level of unprecedented activity. Four new companies opened up in one year, representing an investment of a quarter of a million dollars. The success of the industry prompted the News’ Editor to observe, “With the clay, fuel and power why should Medicine Hat not make the pressed brick, common brick, sewer pipe, tile and cement for the whole west.”

Many of the clay products factories established in Medicine Hat were small businesses. However, the two plants which dominated the industry were both large-scale operations: Medicine Hat Brick & Tile started out as a small, family-run operation, whereas Alberta Clay Products was from the start an industrial giant.

In 2010, an Industrial Archaeologist named Talva Jacobson came to the Historic Clay District to complete an archaeological study of Medalta’s Kiln Room. Three round kilns, as well as a wealth of other archaeological information, was discovered under the concrete floor which was constructed sometime in the 1960’s.

Learn More about the Kiln Excavation

Medalta was the catalyst for a lot of fond memories and stories, that’s what we notice with nearly every visitor through our doors. The pottery produced in Medicine Hat was created by people who had fascinating stories to tell. Over the years some pretty interesting ones made their way back to us. 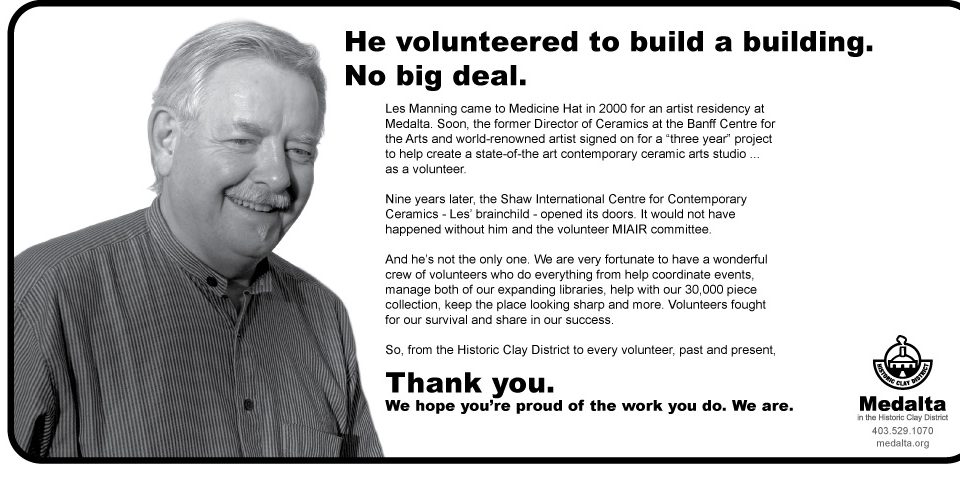 The pottery produced in Medicine Hat was created by people who had fascinating stories to tell... 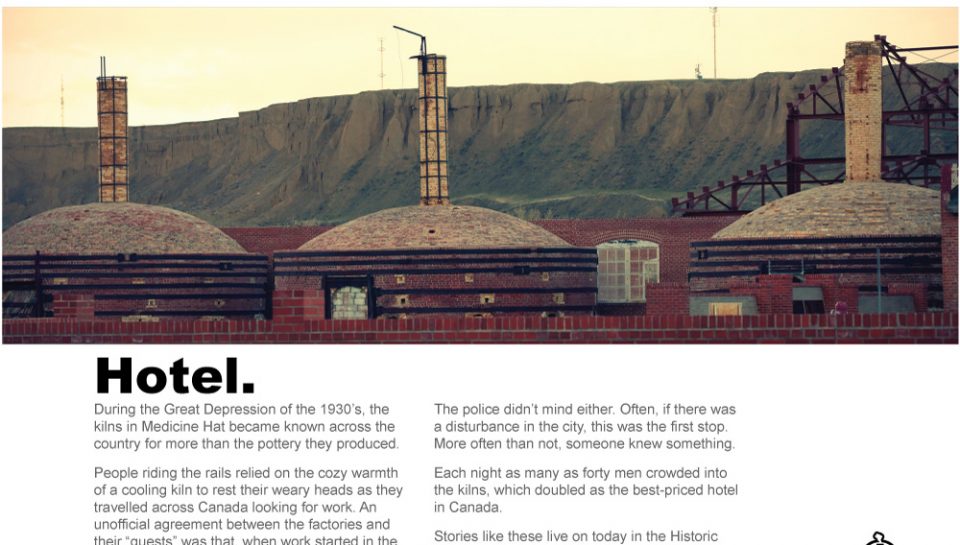 Medalta was the catalyst for a lot of fond memories and stories. That’s what we notice with nearly every visitor through our doors... 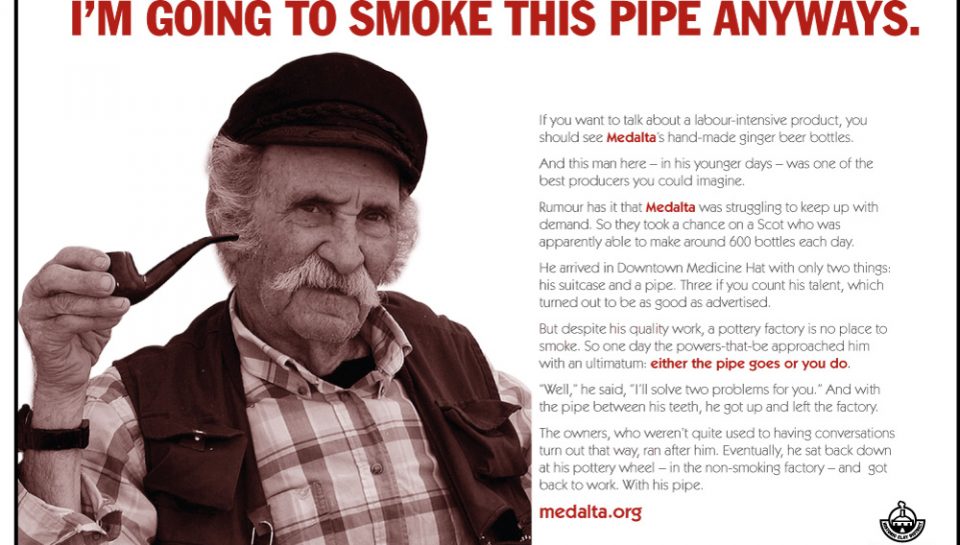 Because of the prolific production from this particular factory, Medalta’s pottery formed a significant backdrop to many Canadians’ lives... 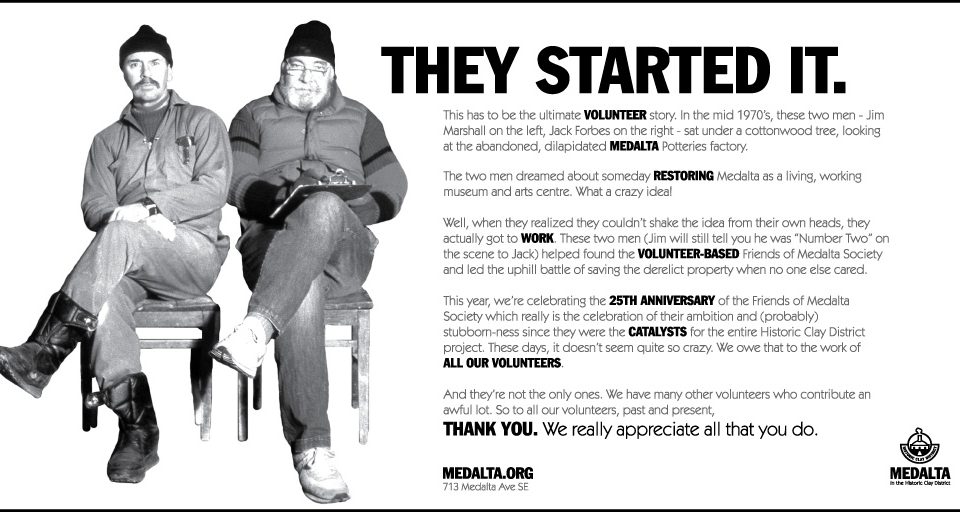 We find people telling us of their interaction with Medalta pottery – a thought that has probably long been buried... 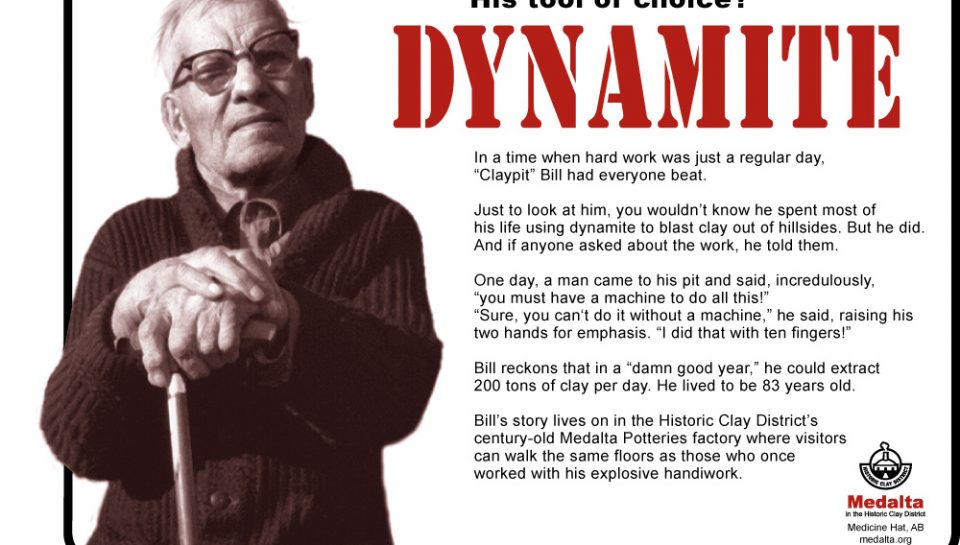 It has been said over the years that Medicine Hat’s clay industries formed the original backbone of this city in the beginning of the 20th Century...
Translate »